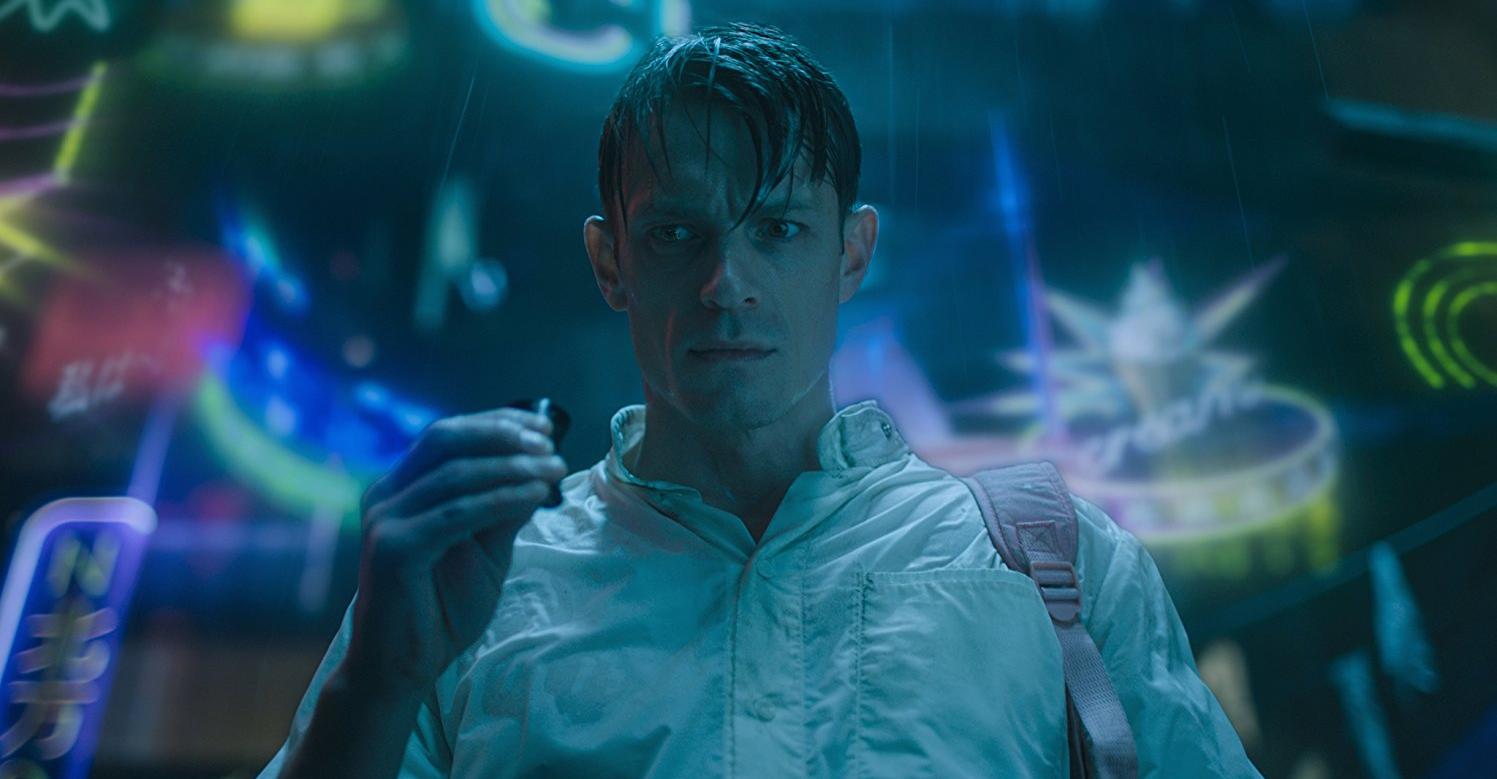 The irony of this is that this future-noir – based on Richard K. Morgan’s novel of the same name – has a severe case of attention deficit disorder as it perpetually flits between dense world-building, ultra-violence, naughty words and even naughtier body parts. Altered Carbon‘s immediate issue is that it comes at you at a speed that is far over the recommended speed limit for safely generating audience investment. Case in point: there’s a murder-mystery in here somewhere that is supposed to be driving the plot, yet you could be forgiven for missing it in the opening episodes with your head rattling around inside this futuristic washer-dryer that’s permanently set to full-spin.

Indeed, during the chaotic first episode, our protagonist Takeshi Kovac (Joel Kinnaman) uses an implant on his eye that sends him on a dizzying trip through the salacious offerings of Bay City (formerly San Francisco) which leaves him gasping for breath and begging for release from the experience. Chances are that many viewers will be feeling the same on top of an overwhelming sense of deja vu thanks to Altered Carbon wearing its influences on its sleeve with all the subtlety of a contestant on Ru Paul’s Drag Race. Your immediate reaction to this opening gambit could well be to expunge Altered Carbon from your watchlist, writing it off as Netflix splurging their cash on yet another concept that flies far too high for its own good, just like they did with Bright a few weeks ago. However, just before I started to consider writing an Icarus-style obituary for the streaming giant’s creative prowess, Altered Carbon eventually settles down, starts making some sense of its intriguing concepts and, against my better judgment, I somehow found myself enjoying it.

The current Holy Grail for TV studios is finding a substitute for HBO’s Game of Thrones once the hit fantasy show comes to its no doubt bloody conclusion early next year (hence why Amazon are sinking the best part of a billion dollars into their Lord of the Rings show). Netflix may well have their eyes on that prize too since while Altered Carbon is decidedly different in its setting and concepts, it is remarkably similar in tone and plotting. I lost count of the amount bare breasts and genitals that this immodest sci-fi proudly displays on top of all its gory violence and the slightly preposterous number of double-crosses implemented by its multitude of nefarious characters. However, Altered Carbon doesn’t quite have the brains to match its brawn like GoT does and the end result feels more akin to the sci-fi equivalent of Spartacus: Blood & Sand. That isn’t to say there aren’t some compelling ideas at play in the show, though.

The central conceit of AC‘s dystopian world is that humankind has discovered the remnants of an ancient alien civilization on their intergalactic travels, which has allowed them to develop technology that enables human consciousness to be transferred to new organic bodies. These bodies are known as “Sleeves” and the consciousness is implanted at the base of neck via a small disc called a “Stack”. As long as the Stack remains intact upon death then you’re good to go on a new Sleeve, but if it is destroyed or damaged then that could well be the end of the line unless you’re one of the super-rich “Meths” (derived from the biblical character, Methuselah), who can afford remote back-up of their minds to be transferred into clones (which aren’t quite the same thing as Sleeves). And this is only the tip of the iceberg for Altered Carbon‘s myriad of jargon, tech and concepts that can very easily stretch your attention to breaking point.

The plot centers around Takeshi Kovacs (Joel Kinnaman) being awoken from a centuries-long prison sentence to solve a prominent Meth’s murder (rumors of his demise have been greatly exaggerated, though). As the last remaining “Envoy” – a class of super-soldier from hundreds of years before AC is set – Kovacs is uniquely qualified to solve the crime at the behest of its victim, Laurens Bancroft (James Purefoy). Kovacs (who is also played by Will Yun Lee in multiple flashbacks) is a defiantly no-nonsense kind of guy who has the strength and pain-threshold of an oak tree with the emotional range to match. As such, he is often less than a compelling protagonist – a matter that isn’t helped by Kinnaman turning in yet another charisma-free turn that brings back painful memories of his flat performance as Alex Murphy in the pointless Robocop remake which no one wants to be reminded of.

Fortunately, there’s so much going on around Kovacs plot and sub-plot wise with various eccentric characters eddying in and out of proceedings, that the show rarely depends on Kovac’s distinctly dated male power-fantasy to carry it. Unfortunately, some of these goings-on are more than a little familiar.

What would designers do without Blade Runner when creating future dystopias? Well, they’d have to use their imagination for a start, something that is sorely lacking in the look of Altered Carbon. This isn’t just a lazy critique of the show’s aesthetics; the extent to which the production team rips off Ridley Scott’s classic future-noir is truly galling. Bay City is a neon-soaked, rain-drenched hellhole where a multitude of western and eastern cultures have irrevocably fused and the cluttered streets exist under the tyranny of seemingly endless skyscrapers. So, as you can imagine, the differences between this futuristic take on San Francisco and Blade Runner‘s Los Angeles are few and far between. And it isn’t the only seminal sci-fi that the Netflix show owes a debt to.

The show often takes excursions into virtual reality realms for either training or torturing various characters, and participants within these digital worlds can learn to manipulate them to bend the rules to their will. Given that the source novel was written in the early 2000’s, it doesn’t come as much of a surprise that these scenes take more than a few cues from The Matrix. The other notable location is “The Aerium”, a city in the sky that is the sole reserve of the Meths, which has a passing resemblance to Bioshock: Infinite‘s Columbia. Similarities with Ken Levine’s video game franchise don’t stop there since Altered Carbon also has an axe to grind with the philosophies of Ayn Rand, much like the original Bioshock did.

If you don’t figure out that the elitist Meths are the true villains of the piece within the first half-hour, then you deserve this “revelation” to be a spoiler. Despite its mostly muscle-bound nature, there are some faint undercurrents of philosophy and politics trickling through Altered Carbon. The most prominent of these is that excess only leads to more excess, and what could be more excessive than immortality? Since it is only the Meths that can comfortably afford eternal life away from the lottery of government allocated Sleeves for the rest of Bay City’s plebs, their hunger for more extreme pleasures and experiences knows no bounds. As a result, when Altered Carbon occasionally does show more maturity beyond its adolescent fixations on boobs and guns, the show offers a barbed skewering of financial elitism that should resonate beyond its inherent silliness elsewhere.

Netflix’s original shows have built a reputation for being binge-worthy and are a key component of the streaming service’s exponential success; however, Altered Carbon can’t quite match some its stablemates for addictiveness. Given its wealth of mythology, terminology, and backstory, Altered Carbon definitely benefits for being realized on screen in long-form television (it gives me a small migraine trying to imagine how a screenwriter could condense all this into a single movie), but this doesn’t mean it always succeeds in holding your interest over the ten hour-long episodes.

The opening episode is an object lesson in how to overwhelm and bewilder an audience as the first hour constantly crunches the gears between world-building and storytelling. This pacing problem persists throughout the next six episodes which culminate in a tedious flashback chapter based on Kovac’s time in an off-world rebellion. While this particular episode certainly helps flesh out the anti-hero’s motivations and nature, he is such an unengaging character in the present day that it all feels rather futile. This could present something of a blockade for viewers who have already grown frustrated with Altered Carbon‘s meatheaded handling of its promising ideas.

The many, many conceits of Altered Carbon offer much in the way of machinations and intrigue, so it’s a shameful waste that the characters solve most of their problems by either punching or shooting things. For the first seven episodes, this becomes more than a little repetitive and tedium does begin to set in, but if you can stick with it, you should be rewarded with the final three chapters when Altered Carbon finally finds a balance between its shoot-em-up antics and actual drama.

Once the show starts to tie all its threads together and brings the far more intriguing supporting characters into play, the last three hours simply fly by in comparison to the previous seven. Had the screenwriting and editing been more judicious, there was probably a scintillating six-episode season on offer here which could have propelled Altered Carbon towards television’s top tier. So it’s something of an irony that the show doesn’t practise what it preaches: excess begets excess, and that includes running times of big-budget television.

EXCESSIVE, MOST EXCESSIVE. IF YOUR ATTENTION SPAN AND SENSE OF DECENCY CAN WITHSTAND BEING BLUDGEONED BY ALTERED CARBON‘S BASE INSTINCTS OF SEX AND VIOLENCE THEN NETFLIX MAY HAVE JUSTIFIED YOUR MONTH’S SUBSCRIPTION BY GIVING US A FLAWED, YET SOMEHOW REWARDING SCI-FI NOIR THAT WILL NEED TO BE CONSIDERABLY LESS WASTEFUL IN THE FUTURE TO BE A TRUE SUCCESS.