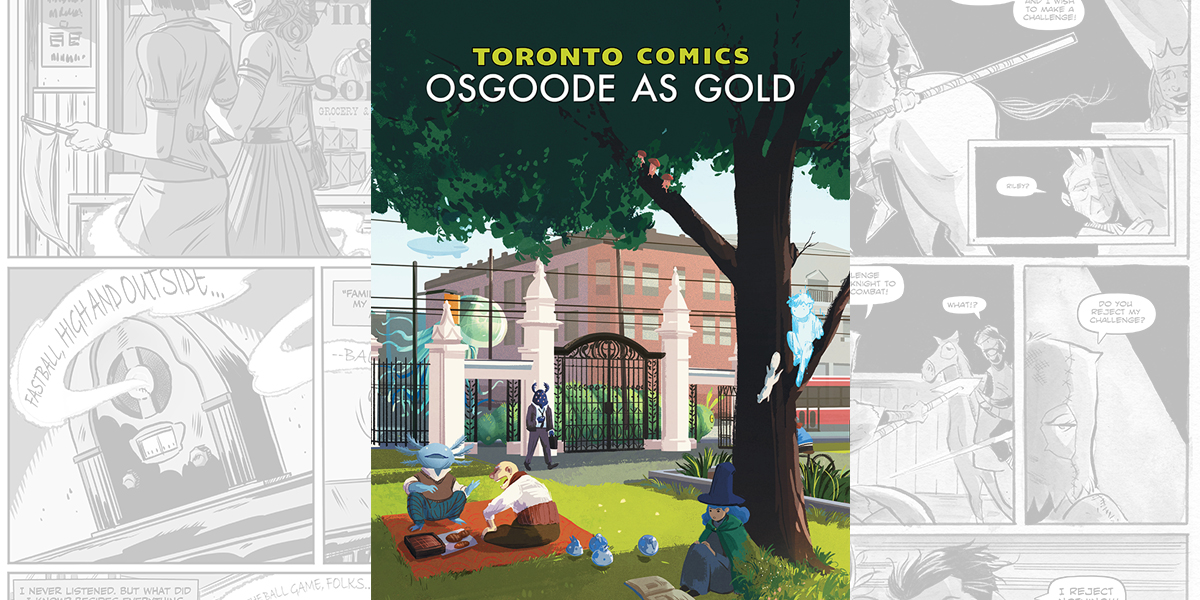 Anthology comics are a great way to get a taste for a variety of art styles and stories–in this case, stories specifically about Toronto, Ontario.

Osgoode As Gold is Toronto Comics fifth anthology inspired by T.O and features stories from over 50 local creators, showcasing the diversity of Toronto’s comics scene. If you’re interested in “competitive wizard barristas, nervous werewolves and scoundrel Trash Pandas” this might be something you’ll want to check out. Like the rest of their anthologies, each book stands alone, so you can dive into the series at any point. As they’ve all been led by a different creative team, each one ends up feeling incredibly unique, providing its own voice and perspective on the city, making each anthology incredibly satisfying in its own way, just like this one is shaping up to be. Despite being in the middle of their Kickstarter campaign, we were lucky enough to get a quick word with two of the editors of this book, Stephanie Cooke and Megan Purdy. Hero Index: What has your experience been working as an editor on the Toronto Comics Anthology, ‘Osgoode As Gold’?

Megan: It’s been really great! I edit comics on a freelance basis and have published zines, but Osgoode As Gold is my first time working on an anthology of this size. Working on the book has taught me a lot, so it’s been a really valuable experience on a professional level. But beyond that, it’s been great to work with so many talented writers and artists. One of the creators I’ve been working with is an experience webcartoonist but has never worked with an editor before – so we got to figure out together what an editor/creator relationship looked like for her, and what she needed from it.

Stephanie: It’s been fantastic! Since we started working on this volume, I’ve gotten the opportunity to work with so many talented creators and help bring their stories to life. Watching the stories grow from a one paragraph pitch into a fully realized comic makes all the hard work we’ve put into the book worth it.

Where did the title for this anthology originate?

Megan: We came up with a giant list of very good Toronto puns and when that wasn’t enough, Steven asked literally everyone he knows for more puns. The loneliest included dozens of the best Toronto puns you’ll never see – until they show up on the next book. Our criteria for the final selection was: is it cute? is it positive? does it fit the tenor of the book and cover? “Osgoode As Gold” ended up being the obvious choice.

Stephanie: The process was a lot of us trying to find a saying or something that the larger population would know (ie. last year’s volume was a play on Young at Heart) and put a Toronto twist on it. Some people may not know what “Osgoode” is outside of Toronto but they know the saying “as good as gold” and can deduce that our version is probably something related to the city to fit in with the theme of the anthology.

These anthologies are inspired by the city of Toronto. Have you ever noticed any other similarities between the stories? Any specific shared themes or reoccurring subject matter?

Megan: So many raccoons! We received over 150 pitches for this book and I swear about 50% of them involved wily raccoons, talking racoons, and tragic raccoons – we managed to limit it to one trash panda story in the book. We also received a lot of post-apocalyptic pitches, but passed on these in favour of stories about the diverse experience of living in contemporary Toronto, and stories about Toronto’s past. I wouldn’t say there’s a clear thematic through line for the anthology, but we did try to pick stories that showed the great and not so great things about Toronto. I guess the thing the stories in Osgoode As Gold have in common is that they aren’t about Toronto cliches.

Stephanie: Yes and no. There are common links between some stories like lots of people wanting to write about our raccoons, the fugitive Capybaras, and occasionally a Toronto twist on a popular movie or TV show, but largely it’s really impressive how original many of the pitches are. It makes it really hard to pick out a handful to showcase in the anthology.

What would you say has been the most personally satisfying thing about working on this anthology?

Megan: Honestly, just seeing all these stories come together, from pitch to final pages, has been a great experience.

Stephanie: I think I may have answered this a little bit at the beginning but again, working with these creators that are at all different levels and watching them tell their story has been phenomenal. Seeing the stories that came out of a more diverse group of creators has been amazing too though. I’m proud of what we’ve achieved with this anthology and the different voices that we’ve helped amplify to show the world different aspects of Toronto. 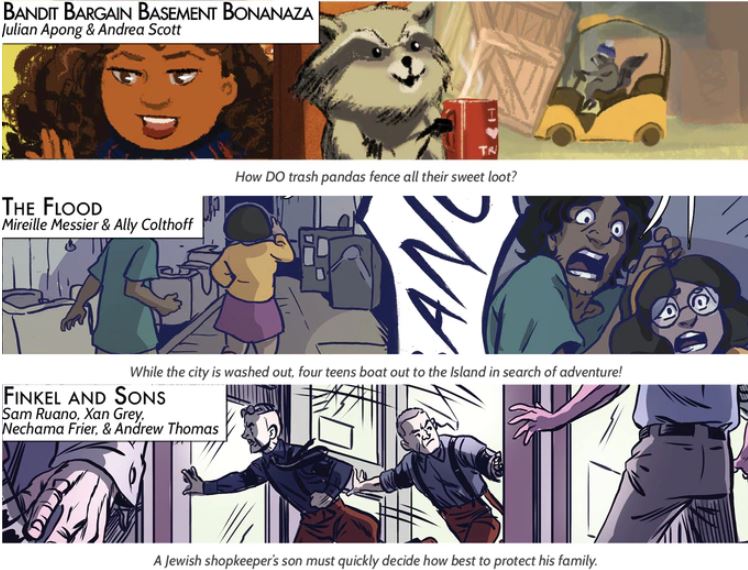 Talk to us about your selection process. How do you decide what goes into the book?

Megan: As the submissions were coming in we kept track of the stories we liked in a shared Google doc, and once they were all in, we got together in person and spent about five hours combining our shortlists. There was a lot of overlap on our lists – some pitches were just so obviously great – but we also spent time talking each other around on pitches that didn’t initially stand out to the whole group. One of the pitches I championed was The Flood, by children’s book author Mireille Messier. We paired her with Ally Rom Colthoff and I think the resulting comic is incredibly cute. We also worked to ensure there were no randos or strays – we didn’t want that one weird comic that feels place out of place in the anthology.

Stephanie: We sat down and deliberated for hours trying to sort out our favourite stories. We wrote out a list of our favourites and then whenever there was crossover between our lists, something was automatically in the book. We have over 160 submissions and had to pick just over 20 stories for the book so it was really hard to narrow it down. We deliberated and made cases for the stories that we loved when there wasn’t crossover and eventually worked out a list that we were all happy with. Ultimately, we wanted to showcase a little bit of everything and make sure that we weren’t telling stories that were too similar to each other.

This anthology features a number of both well-known and upcoming creators. How do you balance featuring content between familiar and fresh?

Megan: The priority was to feature newer creators, with a few more experienced ones to help anchor the book. People like Kat Verhoeven and Andrew Wheeler already have followings and that means, if we’ve done our jobs right, that their fans will check out work by our creators who are just starting out.

Stephanie: In terms of creators, it’s always about just finding that balance. Whether a creator was already established or brand-new didn’t really play into who made it into the book. Obviously with more established creators, it’s easier to help get the word out about what we’re doing since they may already have a following, but an anthology like Toronto Comics is all about trying to give a platform to new creators and help foster other talented people within our city.

We just do our darndest to bring on the best stories possible for the book.

This will be Toronto Comics’ fifth Kickstarter funded anthology. Do you have any advice for small press companies and indie creators who want to use Kickstarter to fund their projects?

Megan: This is only my second crowdfunding project so I don’t exactly have a deep well of advice, but- plan! Plan for the best and the worst and cost things out thoroughly. Before launching the project try to gauge how many people you can count on contributing and encourage them to do it the campaign’s first days. It’s nice to go into a Kickstarter knowing you can raise at least half the funds in the first few days. I also like that Steven [Andrews] has positioned contributing to the Kickstarter as “pre-ordering.” That adds an element of certainty that a lot of Kickstarters lack. When you contribute to a Toronto Comics Anthology book there’s no doubt that you’ll be getting your book, and whatever other rewards you select. Finally, go light on rewards. Focus on selling your core product – the thing you’re Kickstarting – and offering meaningful, complementary escalators. Don’t go the grab bag route, in an effort to pull in more and bigger contributions.

Stephanie: Have a plan. Make sure that you’ve thought about everything and that you have someone like Steven to work out all the details. Do your research and talk to people who’ve run similar projects. Do everything possible to ensure that you’ll succeed, and even if you don’t– don’t let that deter you. Keep telling the stories you want to tell and putting them out there in the world.

Check out and support the Osgoode As Gold Kickstarter now and for more Toronto Comics Anthologies, check out their website.