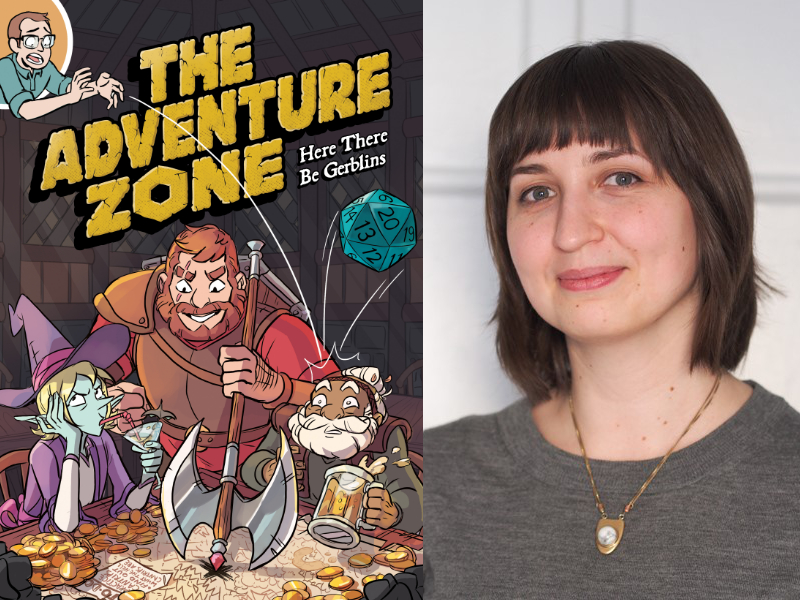 When the McElroy brothers started playing Dungeons & Dragons with their dad on their podcast ‘My Brother, My Brother, and Me’ it was meant to be a fun experiment. Since then, their game has gone on to spawn its own podcast, ‘The Adventure Zone’ which in turn has spawned a huge cult following and its very own graphic novel adaptation.

For anyone unfamiliar with the first arc of ‘The Adventure Zone’, titled ‘Balance’: your oldest brother, Justin, plays Taako the elven wizard, your middlest brother, Travis, plays Magnus Burnsides the human fighter, and their dad, Clinton, plays Merle Highchurch the dwarven cleric. Your sweet baby brother, Griffin, is the Dungeon Master and literally everyone else.

Being the DM, Griffin creates the fantasy world that Justin, Travis, and Clinton have to react to and survive. Anyone who has played D&D knows that the game is a lot like collaborative storytelling, with the party working together to decide what happens next. ‘Balance’ may have been started with a ready-to-play D&D guide book, but the McElroys quickly made the world their own, launching into a stunning creative narrative with memorable characters and an intensely satisfying conclusion. However, ‘The Adventure Zone’ is far from over, and, in a way, is actually starting all over again with the graphic novel adaptation.

Artist Carey Pietsch talked to us about the process of going from an audio medium to a visual one and her experience working with the McElroys.

So, strap on your fantasy seatbelts and brace yourselves for THE ADVENTURE ZONE.

Hero Index: So how did you get involved with this project? Were you already a fan of The Adventure Zone (TAZ) or other McElroy shows?

Carey Pietsch: I started listening to TAZ (and drawing a ton of fanart) in 2015. I had the chance to work with the McElroys on a live show poster for TAZ/MBMBAM the following year, so we’d worked together a little bit, and I’d (half… but not really) been jokingly talking about how much I’d love to get to be a part of a comics adaptation, but it was actually literary agent Charlie Olsen who brought us all together to talk about making a pitch for this graphic novel. I was so, so happy to have the chance to do just that! 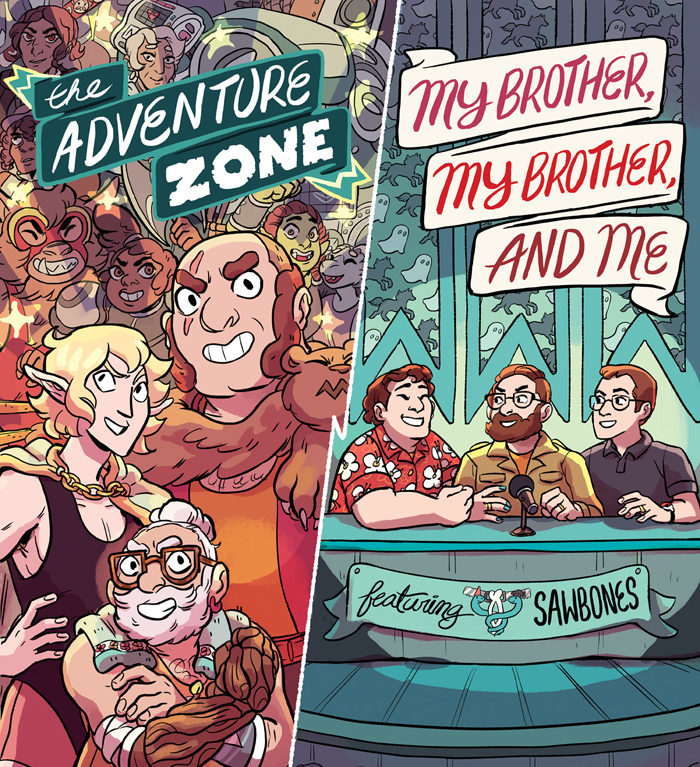 How far along was the podcast when you begin working on the book?

I think we first formally started developing a pitch for the GN back in the middle of 2016, so around the time Crystal Kingdom was ending and Eleventh Hour was just starting up. I began actually drawing the book in April 2017, right as Stolen Century was getting underway.

What was the overall process of turning a podcast into a graphic novel like? Have you ever done anything remotely similar? And how closely did you work with the McElroys on this?

I’ve worked on other comics projects with other teams before, but what set the TAZ: Here There Be Gerblins GN apart is also what I think makes it great: it really is a collaborative process! I’ve made solo comics where I’m doing literally everything by myself, and I’ve also been lucky to work with brilliant writers on other comics, but often, we’ve been limited by time or publisher resources or external oversight, so the whole crew wasn’t able to be a part of every stage of the process in those other projects. But on TAZ GN, we’ve been able to actually work as a team since the very beginning, and that’s really special.

Working with Clint, Griffin, Justin, & Travis McElroy on this book as cartoonist and co-adapter has been such a treat! The scripts are fantastic; Clint, Griffin, Justin, and Travis have all devoted so much time and energy to making their characters and story work in this new format, which really makes it sing. They’ve all put so much care and thought and consideration into the challenge of adapting TAZ into the graphic novel format, and it made me excited about this story all over again.

How did you decide which elements to keep–Griffin’s narration, D&D language, real-world humor, etc–and which parts to leave out?

That’s absolutely a collaborative effort, and another reason I’m so glad to have gotten to work on this book as part of such a brilliant team! After Clint, Griffin, Justin, and Travis’s initial script pass, we all spend a lot of time talking through what we think will work on the page, what might need tweaking and changes in pacing to properly land, and what isn’t going to translate; it’s not always a perfect 1-to-1 conversion. That said, when things do differ, I think it’s really the case that changes in the graphic novel help preserve the feel of the original show– charming, funny, and upbeat fantasy– in the new format, even if the exact content is slightly different.

The way the DM works in the GN is a good example of that kind of decision-making. We all agreed early on that we wanted to find a good way to incorporate the DM into the GN, since he’s such an essential part of what makes the show special! We talked about a bunch of different systems before settling on the format in the book, including one weird but fun one where he would’ve temporarily possessed whichever NPC happened to be in the scene. I’m really fond of what we landed on, which is having the DM pop up in small inset panels with his figure literally breaking out beyond the edges of normal panel borders. We wanted to strike a balance between having him feel like a part of the story and being able to interact with the main characters without being distracting or acting solely as a framing device, and I think that this solution shows that he’s a part of the narrative while also setting him slightly apart from it. 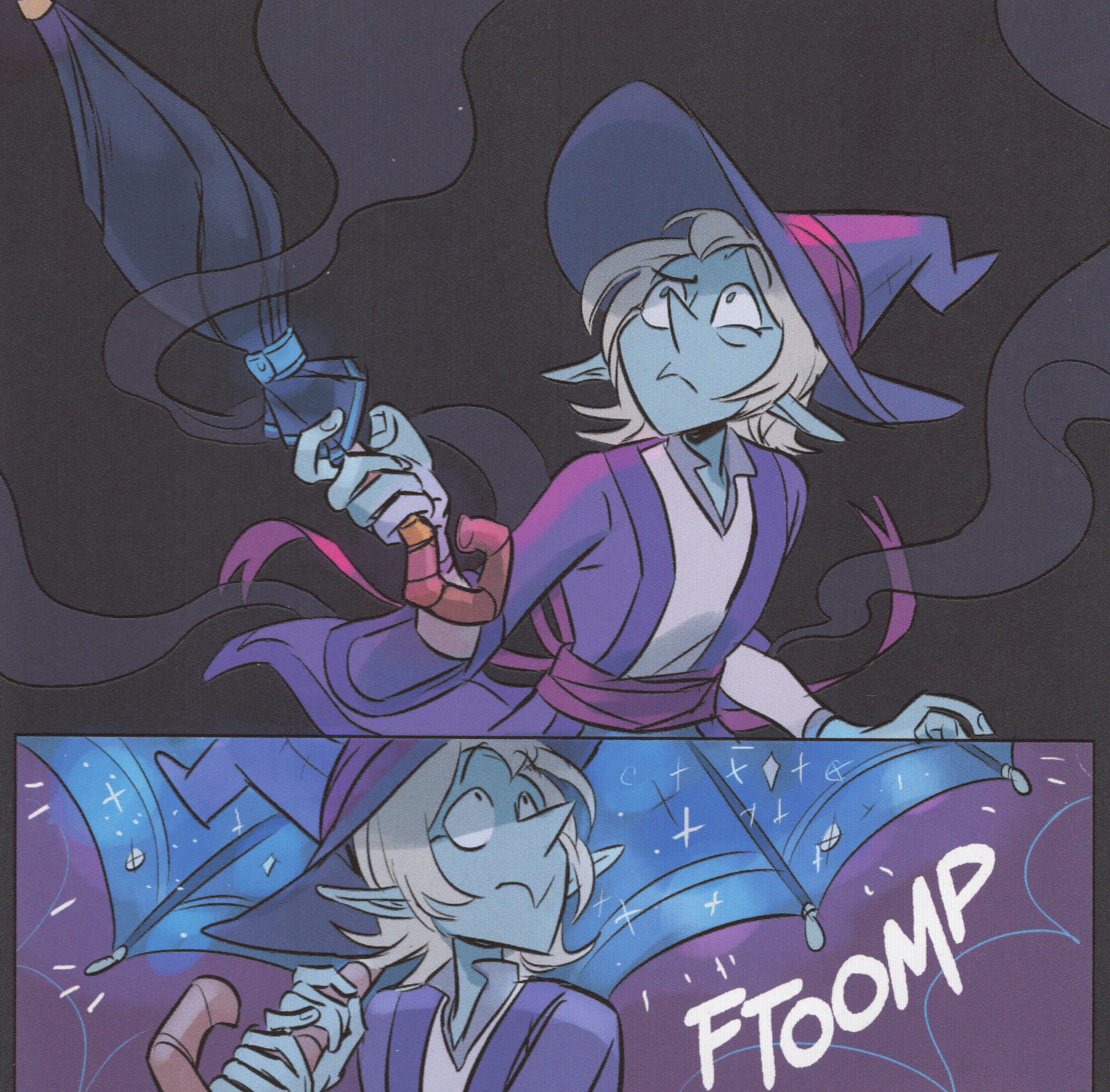 The Adventure Zone (and the McElroys in general) have such an active fanbase. Did any of the fanart for TAZ inform your art? Or did the boys dictate how they wanted their characters or elements of the world to look?

The TAZ fandom is made up of such passionate, wonderful people! I was drawing a ton of fanart when I first started listening to the show in 2015, got to know a bunch of brilliant people that way, and had the chance to work with an even larger group of artists making gorgeous fanwork when Megan Raley and I co-ran The Adventure Zine. It was so amazing to see the TAZ fan community make that project happen, and I’m still in awe of how generous and kindhearted everyone we had the chance to talk with was! I haven’t been as active in fan communities since we started working on the book—primarily because I’ve been so busy working on the book—but the McElroys have spoken about how positive it is that there are so many different visual representations of these characters, and it’s important to note that the graphic novel is one interpretation.

And to the question of creating the visual designs for the graphic novel: this was an extremely collaborative process between the McElroys and me. The process included me reading through the script closely and going back to re-listen to relevant chunks of the arc, discussing what everyone had in mind for various characters, creatures, locations, and props, and then several rounds of revisions until we landed at designs that worked for everyone.

How many times would you say that you’ve listened to the podcast–specifically the “Here There Be Gerblins” arc? Either in preparation for working on the book or just in general?

I went back and re-listened to everything that was out at the time before starting working on the GN, which included Gerblins, and as I moved along through the artwork I’d listen to chunks of scenes to remind myself what things sounded and felt like on the show. If there was a scene where I was struggling with acting or staging, I’d go through it multiple times to try to really capture that, so altogether, I’d say approximately… a whole bunch of times. Like, a lot.

Do you have a favorite panel or sequence?

I could never pick just one! Everything is my favorite while I’m drawing it, and even looking back now, there are too many fun and interesting and different kinds of scenes for me to even make a top ten. One of the many scenes I love is the tea party sequence early on in the book– Clint wrote in a very good accessory for G’nash that made me full-on witch-cackle out loud the first time I read it in the script, and getting to draw that was a real treat. 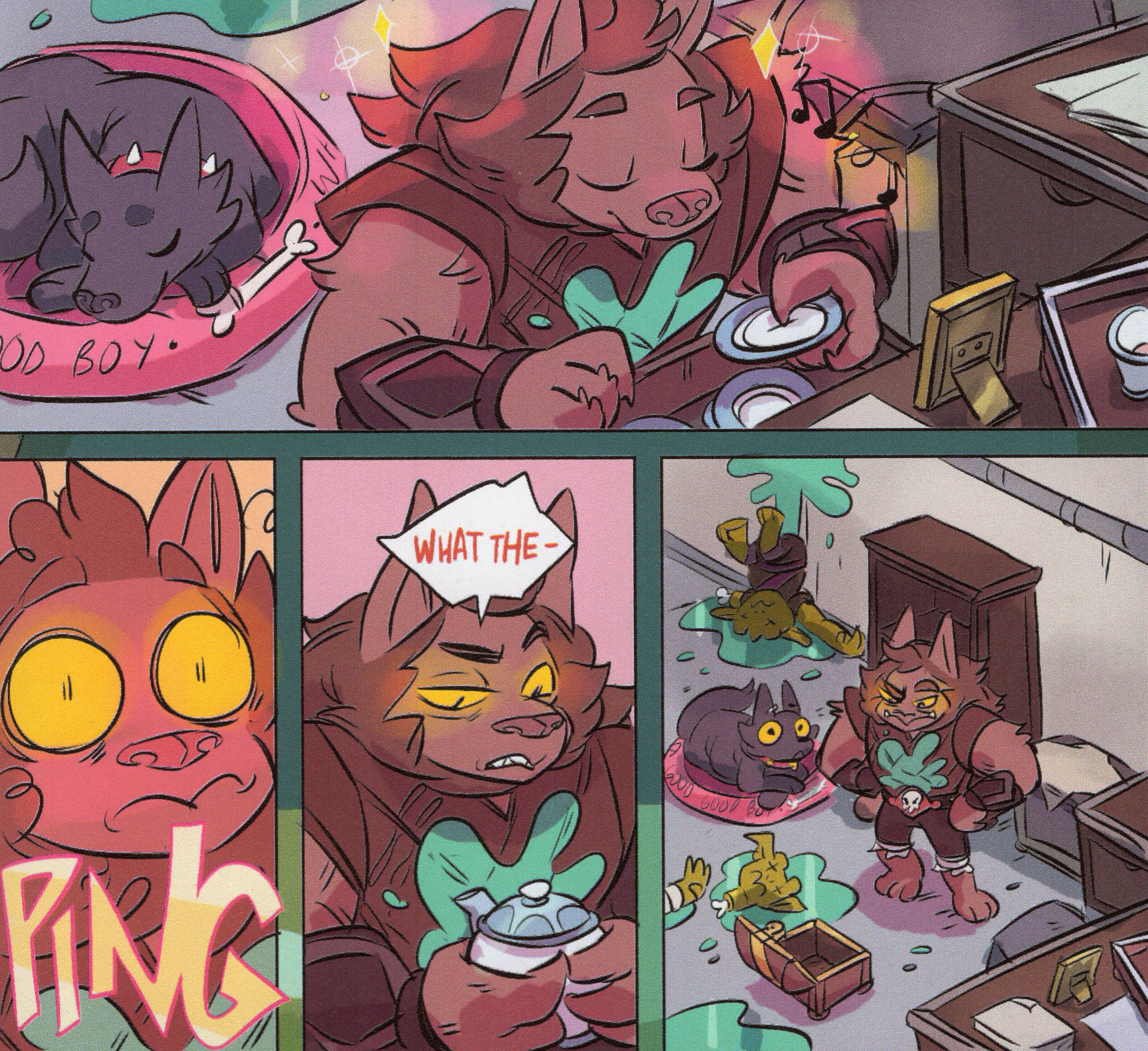 Is the plan to do the whole Balance arc in graphic novel form? And if so, what part are you most excited about working on going forward?

I love so many parts of the Balance arc! Getting to hear it build over time across all these different genres and story formats was really something special. It’s so full of sequences and moments that I think would work really well on the page, and I’d love to get to be able to work on them! Murder mysteries, fast & furious chase scenes, Hurley & Sloane’s story, a crystal lab heist, Refuge, horrible game shows gone wrong… honestly, I think it would be faster to list parts that I wouldn’t be thrilled to get to draw, which include: off the top of my head, I got nothin. As for possible future GNs, stay tuned for more info!

Check out more information about the upcoming graphic novel at First Second, or check out more of Carey’s work on her website. And don’t forget to check out the other McElroy podcasts!