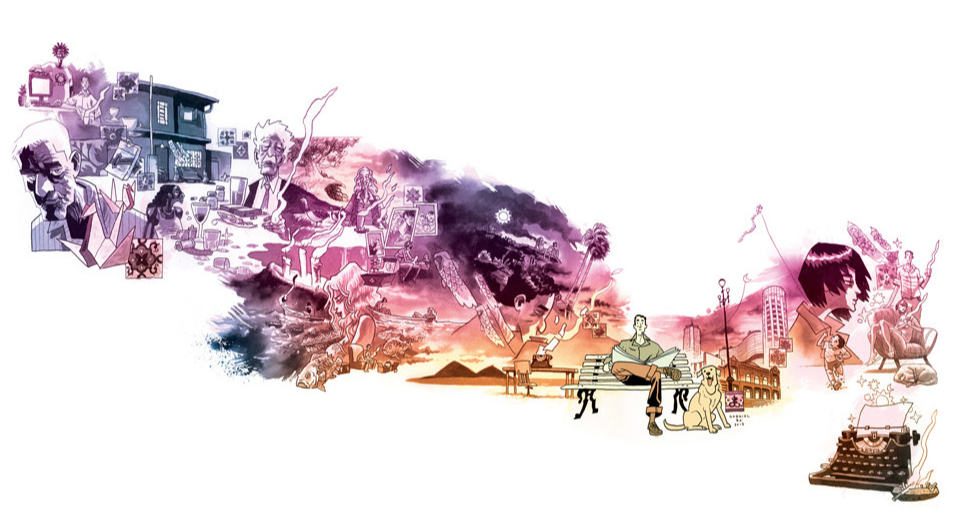 Someone once said that there are only seven basic plots in literature. While that may or may not be true, someone also probably should say that there’s a lot of nuance that gets lost in that sort of speculative generalization. Fictional narrative is a prime example of a situation where the journey is more important than the destination, with the importance being in the way the story is told, how the characters act and react, and what stays with the reader after the story is finished.

Daytripper is a story of many destinations. It is a fiction that feels true, even though–or possibly because–certain elements are rooted in fantasy and speculation. It is a story told in moments, in a series of what-ifs and could-bes, with each chapter reimagining the potential ways a life, and death, can go.

Fábio Moon and Gabriel Bá manage to create something profoundly inspirational and fiercely honest in Daytripper and its protagonist Brás de Oliva Domingos. The art is gorgeous in its clean simplicity and manages to capture the many complex tones and nuances of the plot in the soft colors and detailed shading.

DISCLAIMER: I am of the personal opinion that this story is best read for the first time knowing as little as possible about it. So if you haven’t read it yet, I highly recommend doing so before reading further as there is no way to talk about this book without spoilers.

You have been warned. Moon and Bá are interested in what they call the “quiet moments.” In Daytripper, they create a study of truth and authenticity in life. There are no dramatic car chases or shoot-outs, no superheroes in spandex saving the day. Just people making everyday decisions that shape the course of their lives.

At 32 years old, Brás writes obituaries for a newspaper in São Paulo, Brazil with aspirations of being a novelist. At 21, he is recently graduated and ready to discover love and adventure. At 41, his son is born. At 28, he is lost and heartbroken, sure that he will never be happy again. These snapshots of Brás’s life take place out of chronological order, skipping back and forth to provide context for the important moments and decisions that shape who Brás is, who he wants to be, and who he will become. And how he dies.

Each chapter culminates in the death of Brás, or rather, a possible death, as each chapter also begins with a possible life. But they all tell the same story of the same man.

The story begins with the introduction of three fictional men; their lives and accomplishments layed out for the reader as obituaries written by Brás. One of these men is a painter who has had many lovers throughout his life and painted a portrait of each one, but each painting is titled, Lola. In this same way, each chapter, each portrait of Brás is always Brás, no matter how he dies, because the contemplation of life and decisions are always his.

One of the overall messages that we are presented with very early on is that death is a part of life. But for all that Daytripper is a shockingly honest look at death, it is less about the act of dying–which the book makes clear can happen any time or where–and more about the psychological effect of confronting mortality. But what is most surprising is that it does so without the trappings of emotional manipulation.

Sometimes it’s an accident, other times it’s a mistake, but Brás’s death is always inevitable. Brás, who writes about death every day, recognizes this openly and spends very little of his life wondering or worrying about it. Even as he gets older, Brás concerns himself more with the idea of legacy, of who and what he is leaving behind, rather than what he is going towards.

Each decision Brás makes, every person he interacts with, every lesson he learns all paint the portrait of a man living life to the fullest, and the obituaries are a testament to that. They serve to frame Brás’s own life, providing a fiercely honest representation of his character. They also provide closure, both for the audience and presumably for his family and friends within the story, the same way that the obituaries that Brás wrote helped others.

Daytripper is about finding meaning in life, and whether you find it in family, loyalty, passion, adventure, love or somewhere else, each of these is only one small aspect of a larger picture.

It is a surprisingly hopeful story, a light along an often dark path. Sometimes entertaining and light-hearted, sometimes ominous and profound, Daytripper is a story for anyone looking to be inspired by one of life’s great mysteries.