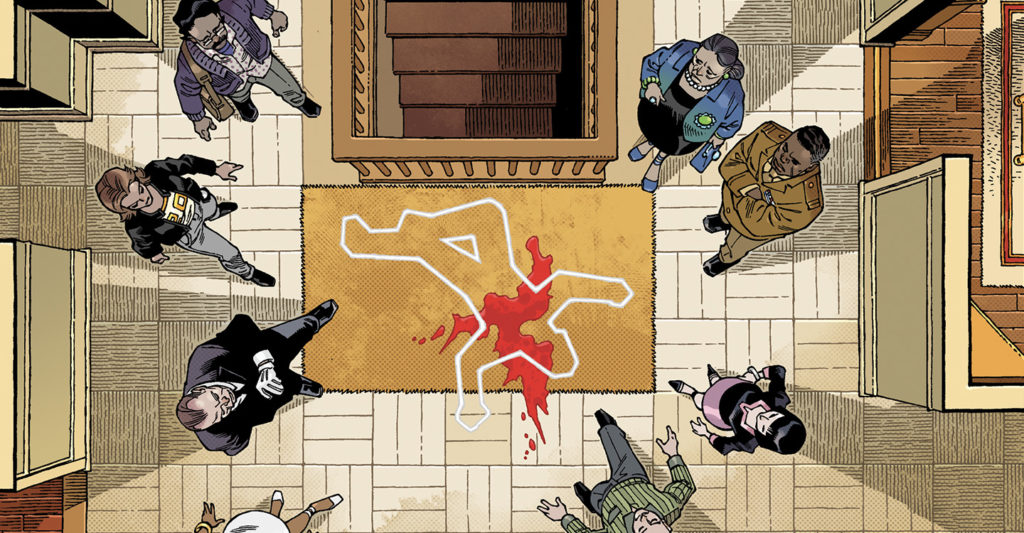 Everybody loves a good “whodunit”, the suspense, the intrigue, the thrill of trying to solve the mystery before the big reveal, so it’s no surprise that the classic board game, Clue, has become such a multi-faceted franchise. Many people are familiar with the 1985 cult film starring Tim Curry, but it’s also been adapted into a TV mini-series, an off-Broadway musical, video games, novels, and most recently, comic books. Not to mention the fact that the game itself has been made into countless pop culture editions from Scooby Doo to Harry Potter to the Office.

Clue was originally a British board game called Cluedo–a combination of the words clue and ludo, which, for those of you who aren’t intimately familiar with Latin, means “I play”–and was first manufactured in 1949 in England. Since then, the standard game hasn’t really changed all that much. There have been a few cosmetic changes, but the basic premise is still the same; six color-themed characters are dropped into a nine-room mansion with a dead body and a slew of weapons and are forced to solve the mystery of his death.

The recent IDW comic, written by Paul Allor and drawn by Nelson Daniel, does a great job of capturing the mysterious spirit of the original game while including many of the updated aspects, which keeps the story feeling fresh and interesting. Plus, the clever and witty writing offsets the grim nature of the subject matter. Familiar rooms and weapons are referenced, while the diversification of the cast shows that a lot of thought went into making this incarnation of the classic mystery something unique.

And since half the fun of this story is the trying to solve the mystery, I’ll do my best to keep this relatively spoiler-free. 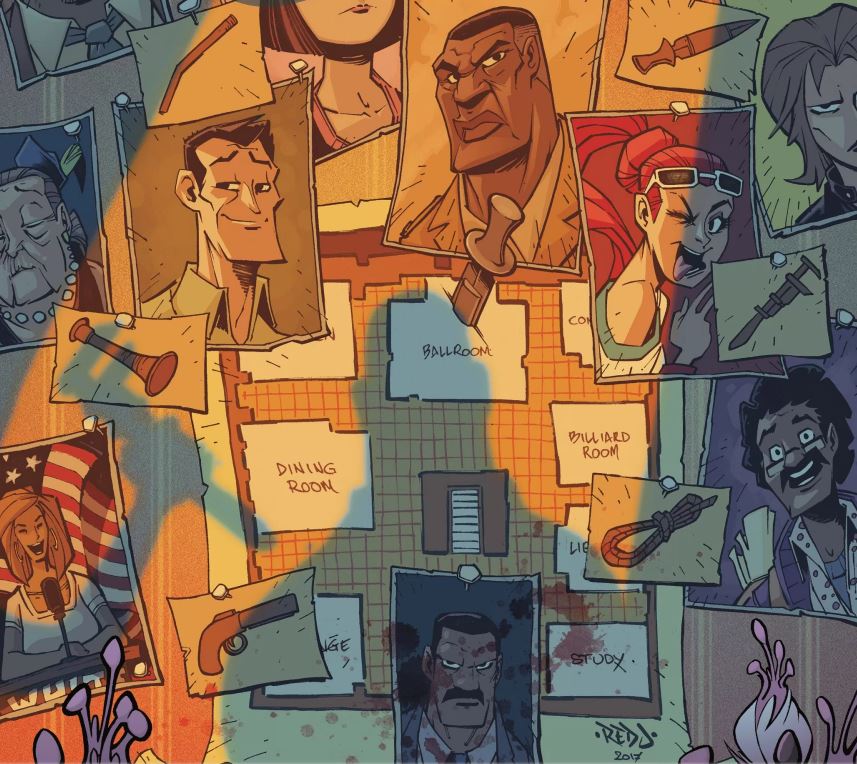 The mystery is introduced, commented on, and directed by the butler; a self-aware, breaker of the fourth wall named Upton. He is the only character in the book to recognize that they are in a comic or to interact with outside forces (such as Carlos Guzman, the editor). Being such a quintessential part of any good murder mystery, the butler makes the perfect narrator, a role he is pleased to play, except when the writer insists on inserting all those pesky flashbacks. Who needs backstory, after all?

It’s not like the characters have any complicated past relationships with each other–oh wait, that’s all they have. My mistake.

Our story begins on a dark and stormy night. As in the game, the guests have been invited to the mansion of a Mr. A Boddy for a dinner party that takes a terrible turn. When Boddy is found shot dead in the library–not a spoiler considering that’s literally the premise of the game–everyone is a suspect. Detectives Amarillo and Ochre are called in to help get to the bottom of things.

The usual cast of colorful characters is joined by another new face as well, Dr. Orchid, who has replaced the housekeeper Mrs. White in recent editions of the game. Don’t worry, Mrs. White’s still part of this story though, and has actually been promoted to Senator White.

For the most part, the others still retain their typical social standing. For example, Mrs. Peacock is still a recently widowed socialite while Colonel Mustard is still a respected soldier and war hero, and Professor Plum is still a brilliant but socially awkward academic.

But Mrs. White isn’t the only one who got a new job. Mr. Green is not a shady businessman-child working in pharmaceuticals and Miss Scarlett is a self-absorbed Australian rap star.

The only person without a personal relationship to the host and therefore immediate cause to be at the party is Miss Scarlet. She was ostensibly invited to give a performance after dinner, everyone else has some kind of personal connection to the others and to Mr. Boddy, even if they themselves don’t know it. 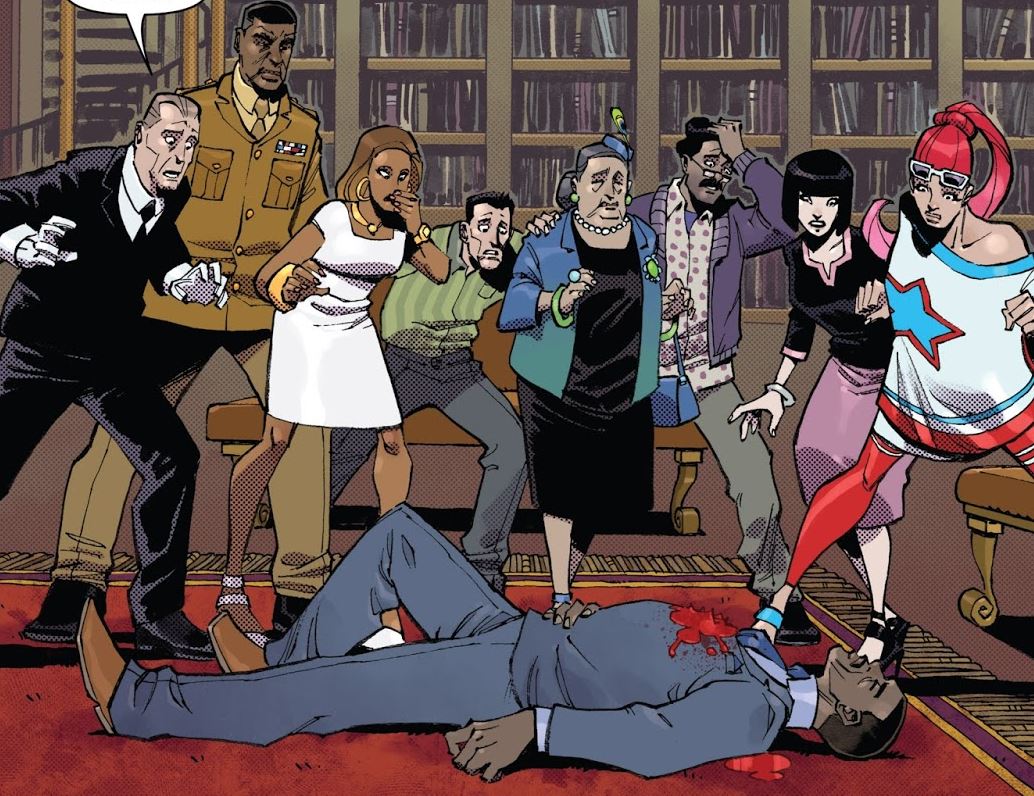 At first, the story seems quite straightforward. A suspect is caught literally with the smoking gun and plenty of motive and opportunity, case closed… Until there’s another murder! What a twist!

Followed by twist after twist, setting up a complex labyrinth of suspicion and betrayal which makes this story fit right in as the spiritual successor to the 1985 cult film. Especially because three separate editions of the first issue were printed, with three separate clues to help readers solve the mystery, in a clear nod to the multiple endings of the film and the 300+ possible suspect-weapon-room combinations within the game. So while the comic does occasionally feel a little campy, it’s done in the spirit of the classic caper and the writing is witty enough to keep up.

My only real complaint with the story is that it actually would have been nice to spend a little more time getting to know the characters at the beginning. The weakest part of the story is that the last two issues spend a lot of time wrapping up loose ends, making the story feel a little back-heavy with flashbacks and innuendo regarding relationships between the characters and their motivations. However, like any good mystery, there are a few questions left unanswered at the end, with the biggest regarding the MacGuffin of the story; the Surobi Zinnia, the mysterious something that everyone wants and is willing to kill and die for.

All of which is to say that this story could have spent a lot longer setting up the dominoes before starting to knock them over, but it’s still fun to watch the pieces topple regardless, especially considering the art is so well done. Daniel does a brilliant job of combining classic conventions such as Ben-Day dots with a generally more modern comics style, creating clean panels that convey impressive motion and emotion. Altogether, this gives the comic a very timeless appeal and making it impossible to pin down exactly when this story is supposed to be set.

This version of the Clue story is fast paced and can probably be read in less time than some games of the board game have taken to play, but sometimes it’s nice to be whisked away and distracted, even for just a short time. The characters feel both fresh and familiar and the mystery, while dark, is never gory or gruesome, making it as family friendly as it’s ever been. Plus, the open ending really only leaves one question: