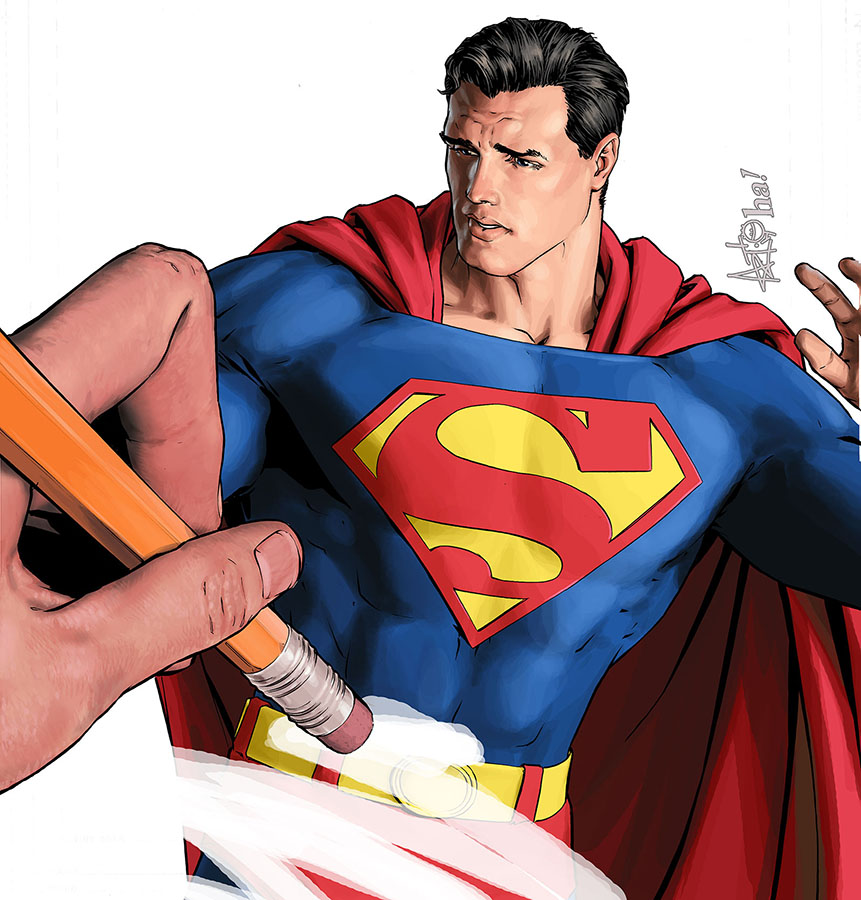 The idea of an overnight success is a myth. A more accurate phrasing for the idea might be “ten-year overnight success”, but still the platitude doesn’t do the truth justice. However sudden someone’s good fortune may appear, it’s without a doubt the result of a lifetime of hard work and dedication to their chosen craft.

The same is absolutely true for comics creator, Gene Ha, who was kind enough to answer some questions for us about his experiences in the comics industry.

If you’ve read comics in the last 25 years, you’ve probably seen Ha’s work. He’s most well known for his art, having done covers, pencils, inks, and more for studios like DC and Marvel, but is also a talented writer and storyteller. Some of his best-known work includes art for the series Top Ten written by Alan Moore, as well as covers and other art for titles such as Green Lantern, Batman, JLA, Captain America, X-Men, and many others, and now his Kickstarter-funded original comic series, Mae, published last year by Dark Horse.

Erin Keepers: How long have you been working in comics for?

Gene Ha: I started drawing Green Lantern #36 in the fall of 1992. So that makes it a quarter century this autumn.

Over the course of your career, how have you seen the industry change?

When I started, there was less diversity in comics. Jim Lee was the most popular artist, so being a white or Asian-American man was normal in comics. Everyone else had to struggle to get their foot in the door. Superheroes were the defining genre, with the market squarely aimed at male readers from 12 to 45. Comic cons were largely men, with the few women often being wives and kids dragged along against their will. That’s why I started drawing free sketches, so unhappy looking women and kids could take something positive away from the con. That is NOT a problem now.

I hear it was very awkward for female geeks on either side of the Artist Alley tables. You’ll have to ask someone else what that was like.

What have you read lately that’s stood out to you?

I’m a huge fan of Faith Erin Hicks’ The Nameless City Young Adult graphic novel series. She’s always showed great wit playing with genre in stories like The Adventures of Superhero Girl and Zombies Calling. She’s taken a great leap with the depth of her writing with her latest books. There’s no magic, but it’s very close in tone to later seasons of Avatar, or even Game of Thrones without the sex and gory violence.

My favorite comic shop book right now is John Allison’s Giant Days. It’s so good that I bought all of the monthly floppies, and now I’m replacing them with the collected trade paperbacks! It’s a slice of life British sitcom about 3 college roommates, somewhere between the TV shows The Young Ones and Undeclared.

People often talk about the sort of, foot-in-the-door, it’s-who-you-know culture of a lot of creative industries, however in recent years, the internet has made it much easier for amateur creators to make their work widely available. What would you say the impact of this influx of creative talent has been on the comics industry?

Forces like Harry Potter fandom, American otaku, the bookstore market, and especially the Internet has created a flood of talent. And those creators are making comics unlike anything we’ve seen before.

The wave of new material has created new venues to get comics out. Nielsen BookScan reports that 10% of all US graphic novels last year were made by one creator, Raina Telgemeier. Her first book, Smile, started off as a free webcomic. Today, it’s a perennial top seller at Scholastic Book Fairs. Before her, those fairs were dominated by prose literature. Now comic books are the stars.

To break out in this new world, you still need to network. This is far easier to find other creators than in my youth, but that means it’s also more crowded. This might be a lot of competition, but I’m surprised by how supportive young creators are with each other. 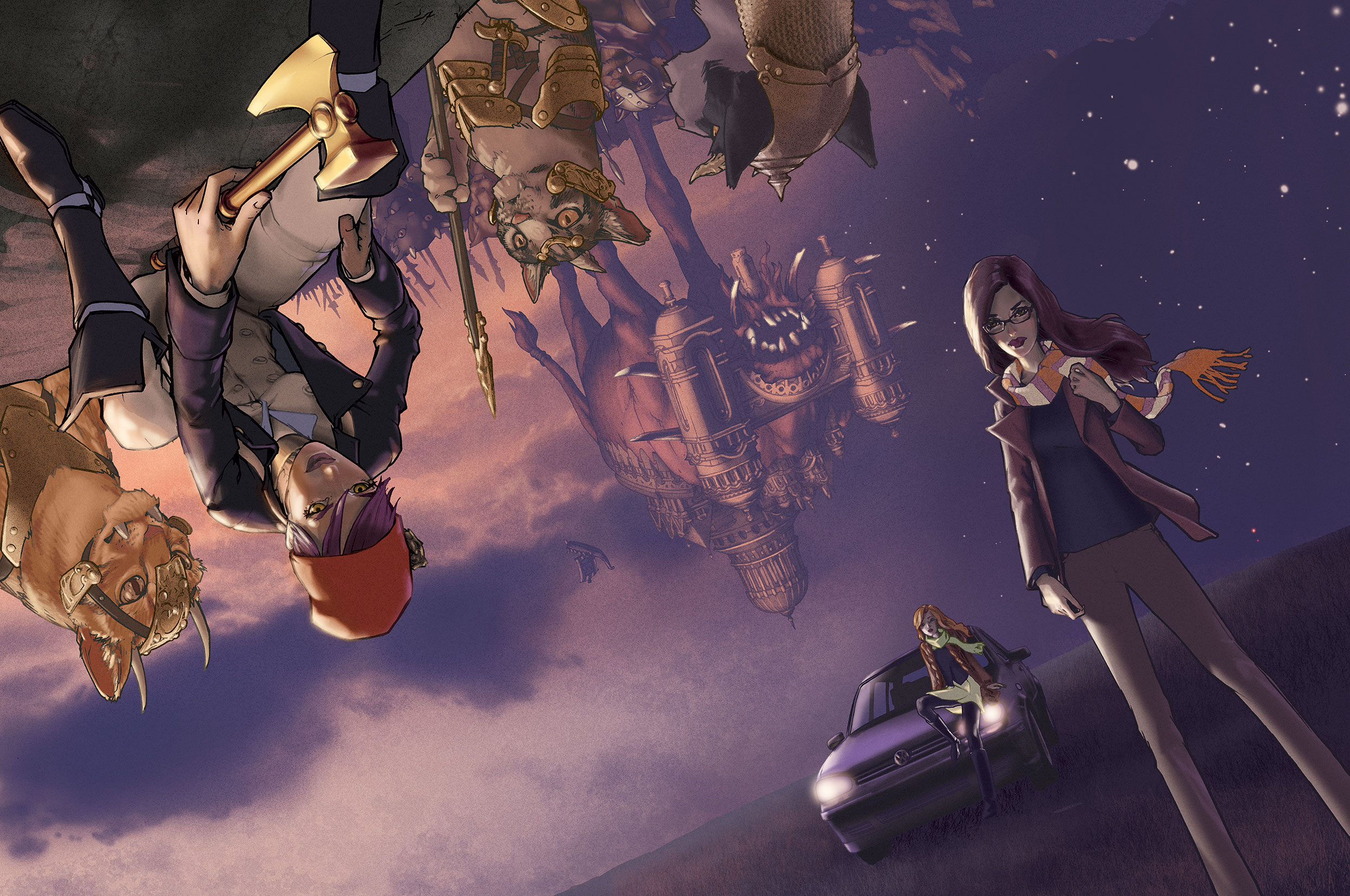 Speaking of independent creators, I wanted to ask you about the process of self-publishing. In 2015 you ran a wildly successful Kickstarter campaign to fund your fantasy comic, Mae, now published by Dark Horse. How did you find the experience of crowdfunding through Kickstarter? Is it something you’d do again?

I’m so glad I did, but I’d launch Mae differently today. It’s a huge amount of work, and will eat months of your life. There’s one month to get ready, a month on the Kickstarter campaign, and one more making the rewards and mailing them out.

You’ll really want to get every detail figured out before you launch. Get estimates from printers and other manufacturers. Go to the post office with a package that’s exactly the size and weight you’ll use, and the clerk can tell you how much postage it will take to get it to different parts of the US and to places overseas. Organize your family and friends, and let them know to back you on the first day.

Your Kickstarter never really ends. You’ll become part of a community centered around your project. I’ll always feel grateful to every one of them.

What would you say are some of the other alternatives for individuals looking to finance their artistic careers?

I made a list of options for a presentation at a comics professional conference:

Book Market, US and foreign

The Direct Market is mostly comics specialty shops, supplied by Diamond distribution. Then there’s the book market, which works through a completely separate set of distributors. Libraries, schools, colleges, and foundations will pay for authors to speak to their patrons and students, and for popular book market Young Adult creators this can be most of their income. Advertising and free webcomics mostly explain themselves. Patreon allows individual creators to set up monthly donations from patrons, like a PBS station.

Grants are more common in Canada and Europe, but there are a few in the US. And finally, you can create a comic with the aim of selling the rights to movie and game design studios.

So what’s next for you?

I’m moving my creator-owned book Mae from Dark Horse to a new publisher. Once the contract is signed I’ll have more to say. There are no big disagreements, but I’m learning that legal departments are very slow. It will happen, I just have to wait.

For more of Gene Ha’s work, as well as advice and information about getting into comics, check out his website.

MARVEL’S ‘RUNAWAYS’ BREAKS CONVENTION AND MAKES FOR AN MCU STANDOUT
PULL OF THE WEEK: JANUARY 10th, 2018
To Top