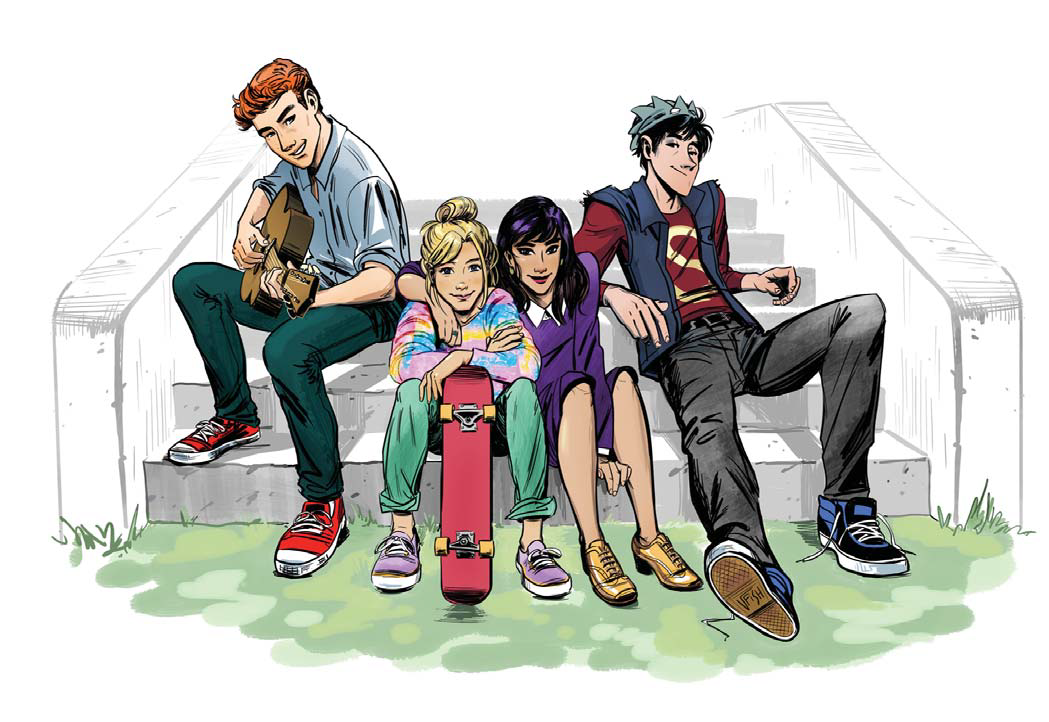 With a new look, several new series, and a new show, Archie Comics have officially updated for the modern age.

Archie Andrews and the rest of the Riverdale gang originally showed up in Pep Comics, back in 1941. Since then, the characters have gone through quite a few changes, although probably none so dramatic as the 2015 relaunch of their flagship title, Archie. Story by Mark Waid (Kingdom Come) and art by Fiona Staples (Saga), Archie kicked off the line of New Riverdale publications which was directly drawn from for the CW show, Riverdale, and made Archie ‘hot.’

Although he’s had a make-over, Archie is still supposed to be a good old, All-American Kid, growing up in unspecified mid-west Americana, a.k.a Riverdale. He plays football, practices guitar in his garage, and does chores around the house. He’s clumsy, a little goofy, but all in all a good person–despite having kept both of his long-time, part-time girlfriends, Betty Cooper and Veronica Lodge, on the hook for 70+ years. Thankfully, all that baggage is something the creators decided to leave in the past.

New Riverdale canon set up that Betty and Archie had been dating since kindergarten, as opposed to old canon where Betty didn’t care about Archie at all until Veronica showed up and she started having to compete for his attention. After an infamous, summer-time “lipstick incident,” Riverdale’s sweethearts break up leaving Archie a free man. Although their friends initially try to get the power couple back together, their efforts are thwarted because it turns out people can’t be manipulated into dating just because their friends think they belong together.

Next thing you know, the gorgeous heiress Veronica shows up and Archie is instantly smitten. After a rough courtship, Archie and Veronica start dating, a relationship that Jughead–Archie’s best friend–doesn’t approve of at all. Initially, Veronica just seems to be using Archie; really only keeping him around because he’s useful and clearly infatuated with her and not because she returns his affections. After initially agreeing to help break them up for Archie’s own good, Betty comes to see that Veronica does care about Archie in her own way.

With Betty busy trying to figure out her own life, she may (definitely) still have lingering feelings for Archie that will (inevitably) resurface later, at least for now Betty and Ronnie aren’t in a state of constant opposition over Archie. In the old comics, Betty and Veronica are best frenemies, and although the new canon doesn’t have them all that close yet in Archie, the girls do co-star in their own spin-off series, Betty and Veronica, which does seem to keep much of the original tone of their friendship–catty with a side of genuine affection for each other–but at least they fight about things that matter. While the characterization is consistent with Archie, no plot points from that or any other New Riverdale series is referenced. All spin-offs seem to carry their own independent narratives despite the shared characters and locations.

And no New Riverdale narrative is more uniquely independent than the new CW show, Riverdale. “Our story is about a town; a small town and the people who live in the town. From a distance, it presents itself like so many other small towns all over the world…safe, decent, innocent. Get closer though and you start seeing the shadows underneath. The name of our town is ‘Riverdale’” (Riverdale, 2017).

Falling into the genre of “wholesome horror,” Riverdale is a Twin Peaks-esque murder mystery staged behind a Stepfordian facade of Main Street, U.S.A normalcy. Located… somewhere in North America, Riverdale, “the town with PEP!” is presented as the epitome of normalcy, a place where nothing bad or unusual ever happens.

A shocking murder shakes up the whole town, cracking the ordinary facade and who knows what secrets will come spilling out?

Spoilers: It’s all of them. All of the secrets.

As Jughead notes in his opening monolog, Riverdale is about the people. Rather than choosing simply to focus on the Archie-Betty-Ronnie triangle as many of the comics have, the show sets its sights on developing a varied ensemble cast of characters to better follow everyone’s drama.

Although the main cast is still pretty white, there has clearly been a push for racial diversity from the Riverdale team. Veronica and her mom are both Hispanic-American (we haven’t seen her dad yet, so it might be that Ronnie is mixed), Josie, her Pussy Cats and her mother (the mayor) are all black, and Reggie–beef-head jock extraordinaire–is Asian-American. Hopefully, there will be even more in episodes to come.

In the meantime, not only are Betty and Veronica interested in our boy Archie, they now have to compete with several other characters for his attention, including (but not limited to) Cheryl Stone–queen bee of Riverdale–Valerie Smith–Josie’s Pussy Cat keyboardist–and even one of their teachers, Ms. Grundy… The show uses their relationship to (almost) address issues of statutory rape, having Ms. Grundy remorsefully try to push Archie away “because it’s wrong,” although the words “and illegal” seem to have been left out. Eventually through the course of other events, the sheriff does find out and get involved, however, Ms. Grundy isn’t really punished, just forced to resign from Riverdale High and move away.

And that’s only the beginning. Plenty of people are having inappropriate relationships and affairs and babies and covering up murders. Oh right, because that’s what starts all this, the murder of one of their classmates; Cheryl’s twin brother, Jason.

Betty and Jughead become Riverdale’s keenest investigative minds, trying to discover the truth about what happened to Jason and the countless other mysteries that seem to be connected.

Which leads us to probably one of the show’s most heated topics of debate: Jughead’s sexuality.

Jughead has almost always been canonically adverse to all forms of physical affection and romance. In Chip Zdarsky’s New Riverdale spin-off, Jughead, Jughead is openly acknowledged to be absolutely uninterested in relationships or sex all with anyone ever. Jughead’s one true love is food. However,  the show doesn’t seem to be going that direction. Before the implementation of a Betty/Jughead relationship–or, ‘Bughead’ if you will–many people were excited to see if Riverdale would feature an openly asexual character and have been pretty vocally disappointed since that doesn’t seem to be the case. Although the cries of ‘ace erasure’ are not unfounded, there’s always the chance that Riverdale is playing the long game here. The creators of the show now have a very unique opportunity on their hands to lead the discussion on asexuality, actively showing a character discover and embrace their asexuality. What will be even better is if they don’t break up Bughead to do it.

After openly attacking slut-shaming, it would be nice to keep the social justice ball rolling. Plenty of asexual people have healthy, loving relationships, and it would be really nice to see that openly expressed and destigmatized.

So time will tell what the show’s endgame is when it comes to relationships, but I’m actually pretty okay with moving away from the Archie-centric narrative. After all, Riverdale succeeds primarily due to its strong central cast of women, sometimes even despite Archie. After all, Betty and Ronnie–and surprisingly enough, their moms–are the ones pushing the plot forward while Archie is busy moaning over trying to juggle his passion for football and music. When Archie tries to come in and write lyrics for the Pussycats, Josie points out why it’s important that they as “divas of color” get to tell their own stories, citing the choice for the name of their band as representative of them having to claw and scratch to get what they want.

Overall, confidence, boldness, and friendship are encouraged in the women in Riverdale and it seriously carries the show.

So if you’re a fan of Archie Comics and you’re willing to put up with a bit of campiness, you might find yourself enjoying the New Riverdale canon. Despite having faced zombies, potential futures, and the galaxy’s deadliest hunter, there’s still plenty of awkward teenage shenanigans for these kids to get up to. And who knows, maybe someday we’ll even be seeing a certain teenaged witch make her Riverdale debut.

Continue Reading
You may also like...
Related Topics:ARCHIE, FEATURED, The CW